(Thank you to Kate Leahy, of the Sunday Times) 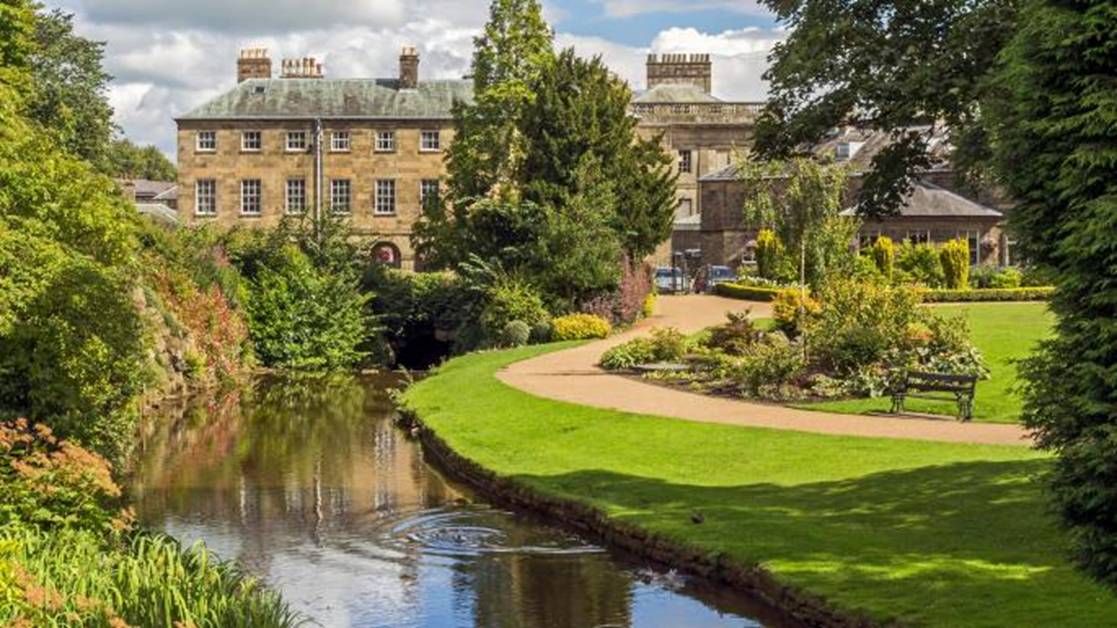 Why?
High up on the edge of the Peak District, Buxton has spectacular views over the Derbyshire countryside. The town is a beauty, too.

It’s packed with genteel architecture, a grand opera house, manicured gardens and a mini version of Bath’s Royal Crescent — set to reopen in autumn as a swish new hotel and thermal baths.

What you do
Start with a visit to the twin-domed Opera House. It was built in 1903 to designs by the architect Frank Matcham, who also devised the elegant balconies and gilded frescoes at the London Coliseum
and Blackpool’s Grand Theatre. 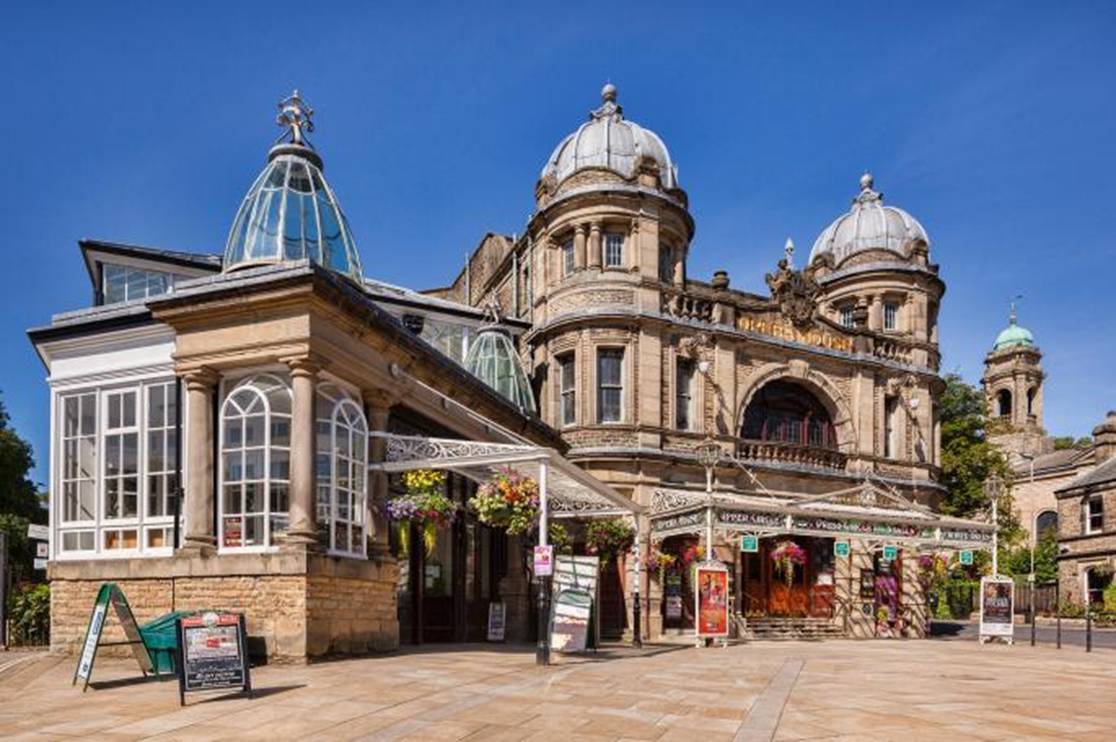 For additional theatrics, book the guided tour led by “Frank” himself, so you can check out the gold leaf, friezes and carved cherubs in the impressive auditorium (£10; buxtonoperahouse.org.uk).

Next door you’ll find the Pavilion Gardens, designed in 1871 by Edward Milner, an apprentice of the head gardener at nearby Chatsworth House. It’s an artwork of landscaped lawns and

shrubberies, dainty bridges and picturesque lakes, with a miniature railway. Stop for coffee and cake in the refurbished glass and wrought-iron cafe (free; paviliongardens.co.uk).

Buxton’s steep hills can give you jelly legs, so take a break on a Victorian tram tour. The reimagined milk float shows off the best of the town, including
St Anne’s Church, Buxton’s oldest building, dating from 1625; and the glass Devonshire Dome, the largest unsupported roof in Europe, built in 1779.

Stand dead centre and shout — your voice will boom around the room (£8; tours resume March 31; discoverbuxton.co.uk).

You can easily lose a few hours poking around the busy Buxton Museum and Art Gallery, housed in a Victorian hydropathic hotel.

Its collections explore the history, geology and archaeology of the Peak District — look out for Ice Age animal bones and teeth, Ashford black marble vases and Victorian watercolours (free; derbyshire.gov.uk).

Time to take the famous waters. You can fill your own bottle at St Anne’s Well, in the centre of town. The spring is a tepid 28C, rather like slurping a lukewarm cuppa.

Opposite is the architect John Carr’s grand Georgian crescent, modelled on the one in Bath. You won’t be able to see inside until autumn, when renovations are due to finish

(only 12 years late), but you can marvel at the exterior.

Park at Poole’s Cavern, five minutes from town, for two intriguing sites. First, take the tour of the 2m-year-old caves, packed with stalactites, stalagmites and crystals

(£10.50; poolescavern.co.uk). After that, pick one of the three trails for an easy 20-minute walk to Solomon’s Temple, a 19th-century folly with views of Kinder Scout,

the highest point in the Peak District, and Buxton below. 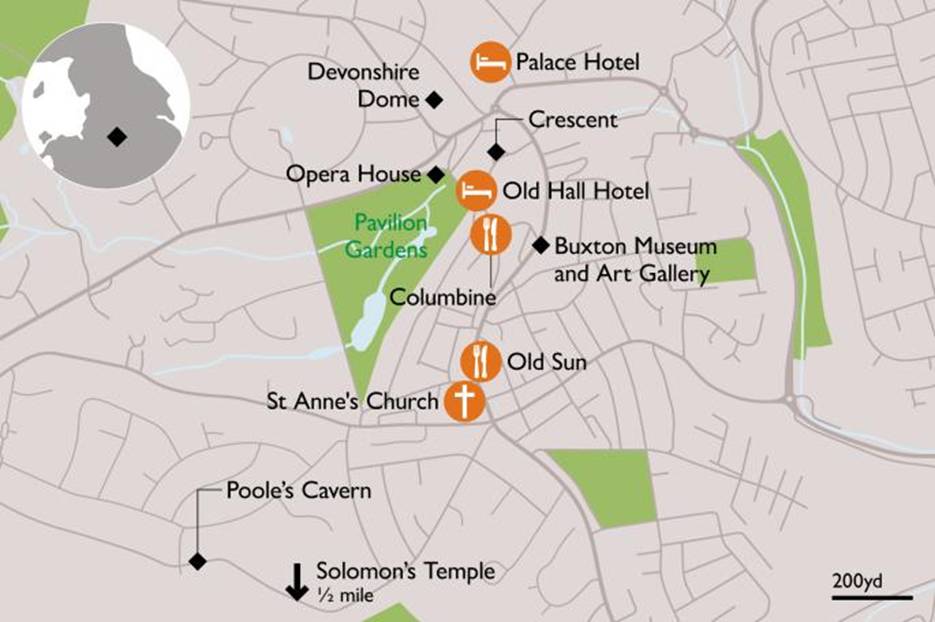 Where you eat
In a handsome Georgian terrace, Columbine is a Buxton stalwart, serving modern British food with an emphasis on local produce.

Settle in for a Sunday roast with all the trimmings in one of the many nooks and crannies at the Old Sun, a 17th-century coaching inn on the high street

Where you stay
Said to be the oldest hotel in England, the Old Hall Hotel has bags of character, with creaky floors, patterned carpets and four-posters.

Mary, Queen of Scots was a regular visitor, staying in what is now room 26 as a captive of the Earl of Shrewsbury after her abdication

Palace Hotel has a spa and an indoor pool (doubles from £60, B&B; britanniahotels.com).

Kate Leahy was a guest of the Old Hall Hotel